In 1908, when Bernard and Mary Goward built their new home in the Cadboro Bay forest they named it ‘Woodlands’. That name is as appropriate now as it was then because the garden beds and lawn of today’s Goward House are still nestled within this precious six-acre urban woodland. Interested hikers can experience the beauty and diversity of this forest along a network of footpaths established between 2002 and 2010.

By choosing  combinations of these Goward woodland footpaths, you can go for a  one kilometre walk through this urban woodland without leaving the Goward House property.

Trail maps are available at the front desk or from three outdoor dispensers along the footpath route. 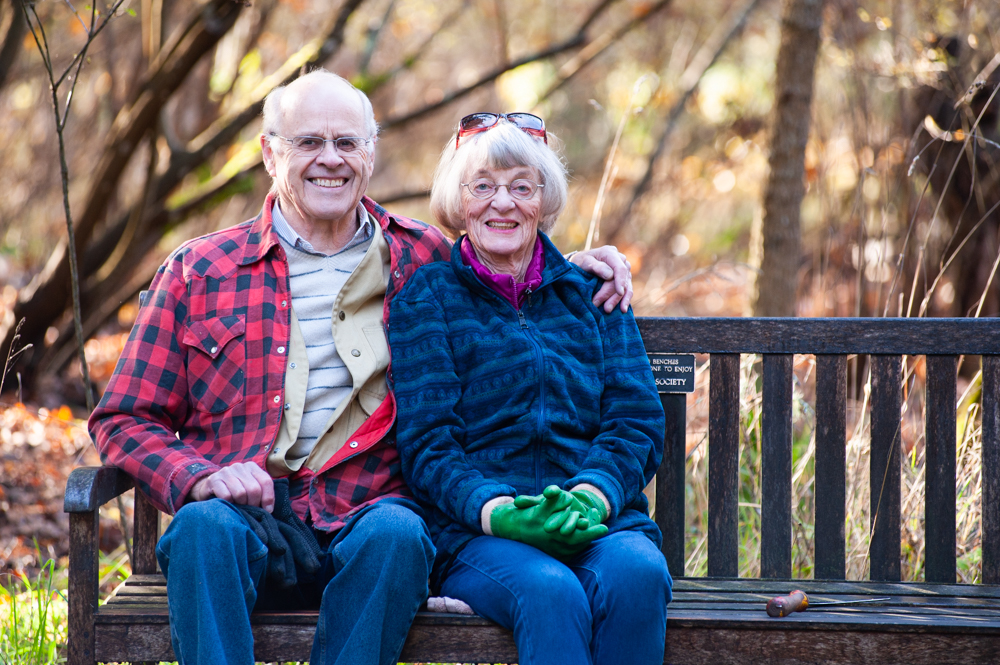 Everett and Merle Peterson on their daily rounds

Goward House has six acres of woodland on its property, carefully improved and maintained by our very own devoted ecological restoration specialists Everett and Merle Peterson, and their crew of volunteers. Throughout the woodland are loop trails for your enjoyment. Learn more below…

Restoration of Goward Gardens and Woodland

In April 2008, Goward House Society received a two-year grant from Saanich Legacy Foundation to upgrade the garden beds and to encourage use of native plant species in the contact zone between garden beds and adjacent woodland.

By summer 2009, approximately 70 potted native plants had been planted in newly enlarged Goward House garden beds. In October 2011, Goward House Society received a grant from the Fido-Evergreen Grant Program under the title “Boundary naturalization in a municipal natural area, Saanich, B.C.” That project, completed in June 2012, resulted in removal of invasive non-native shrubs and vines in a 5-meter-wide band of the Goward woodland along the rear of private properties on Rowley Road

The woodland restoration program has been greatly aided by financial support from Saanich Legacy Foundation, the Fido-Evergreen program, and from Small Sparks grants from Saanich Recreation and Parks. Further restoration is planned to return the Goward woodland to more natural conditions.

Today’s urban forest surrounding Goward House is a result of the fortunate confluence of several circumstances three decades ago: the desire of the Goward family that the property remain undivided when they sold the property to the District of Saanich; the initiative and strong support of the Cadboro Bay Residents Association, under the chair of Gerry Gabel,  in the period from 1987 to 1989; the support of residents adjacent to Goward House who were anxious that the property remain as undeveloped urban forest; and the late 1980’s support of Saanich Council and their 1989 rezoning of the property from single-family use to P-4 (Recreation and Open Space).
Let us not forget the important role played by the Cadboro Bay Residents association in Goward House and in the Goward woodland that we know today.
Everett Peterson

Volunteers have been crucial to the success of the woodland restoration since 1989.  We welcome new volunteers both from members of the Goward House Society and from the local community to assist with this restoration project. If interested, please contact Heidi Hodgins, Goward House (250-477-4401) or email Everett Peterson at westeco@shaw.ca

Come and stroll our wood-chip trails located amongst the cottonwood, Douglas fir, and arbutus trees; breath the fresh woodland air and listen to the birds.

This photomap shows several entry or exit points that connect chip-surfaced footpaths to the Goward House garden and lawn area. From the map, walkers can find several alternative circular routes of varying lengths to suit their interests. The largest perimeter walk of one half kilometre can begin at location C near the lower Arbutus Road entrance to the front parking lot. A walker can proceed down the hill from location C to location A, a low wetland area of the Haro Creek floodplain dominated by cottonwoods, red alder, skunk cabbage, ferns and horsetail.The three largest cottonwoods on the property occur at location A, and from there the perimeter footpath extends south to the largest Douglas-fir in the Goward woodland at location D. 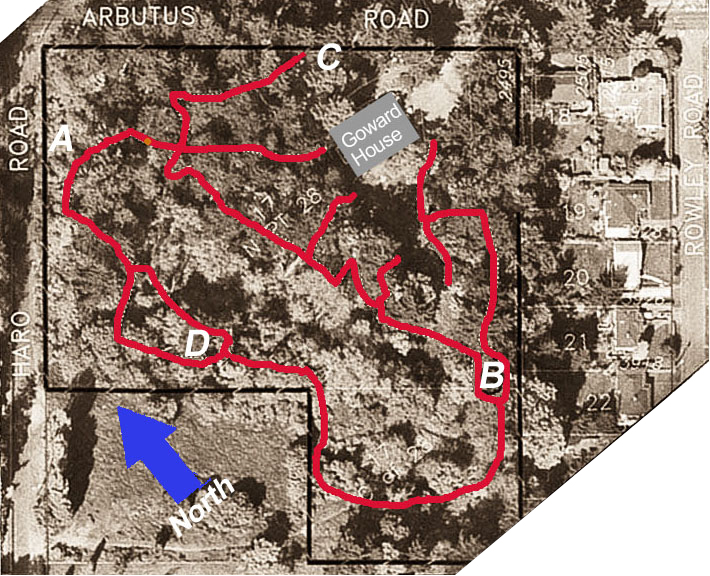 TO SAFEGUARD OUR CHERISHED WOODLAND AND HERITAGE HOME, SMOKING IS NOT PERMITTED ANYWHERE ON THE 6 ACRE GOWARD HOUSE PROPERTY.

For your safety, please do not use these footpaths during high winds when there is risk of falling debris.

Further information about the history of Goward House and its surrounding six acre woodland can be found in the booklet ‘From the Beginning: Woodlands and Goward House, A Brief History.’ The booklet is available for purchase at the Goward House front desk.